If you’re interested in a Manco Go-Kart, you’ll be happy to know that Manco has led the way in Go-Kart innovation for over thirty years. When purchasing a Manco Go-Kart, finding the right model is important. Several of Manco’s models stand out among their peers, and this list will point out several of the best Manco Go-Kart models available to consumers.

How We Chose Our Ratings 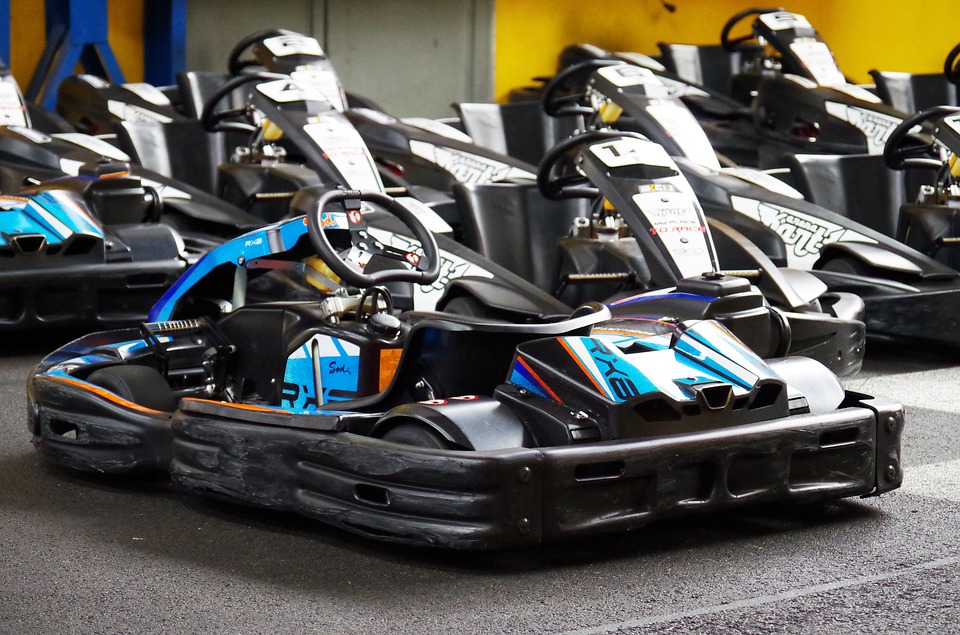 All of the Manco Go-Kart models reviewed here will undergo a tiered evaluation. The feedback of users will be taken into consideration in the final rating. The evaluations given by other reviewers will be weighed into the result as well.

The stated design goal of the producer, and how well they meet that goal, will be taken into consideration. If a company is known for a special design choice, such as wheels with extra traction, these will be mentioned. Manco’s overall reputation, and how it relates to these design features, will be weighed into the final decision.

After all of this feedback is considered, it will be paired with our experience with the product to give a final review. The rating for each Manco Go-Kart is based on a five-star system. The intention is to select the best Manco Go-Karts for this list. A low rating means that it may not stand out uniquely, but the Go-Kart should still be considered an above-average product.

Because all products on this list are Manco Go-Karts, the intention is to present models that appeal to different types of Go-Kart enthusiasts. While each Go-Kart is expected to overlap in some regard, each Go-Kart on this list must have some feature that stands out as wholly unique compared to other offerings on this list.

The products listed below are some of the best Manco Go-Kart models available. This list will mention Manco Go-Kart lines, but you will also see a recommendation for a specific Go-Kart from that line. Most Go-Karts in a series are relatively similar, with minor production differences so that the review will address the greater Go-Kart Line rather than the individual product model. 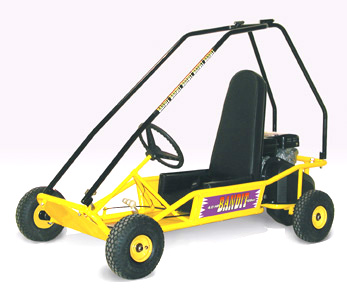 The Manco Bandit line is a series of Go-Karts designed with children in mind. The Manco Bandit 104B-11 Go-Kart is a good model for introducing Go-Karts to young enthusiasts for the first time.

The frame is lightweight, and the Go-Kart can’t carry a passenger over one hundred and twenty-five pounds. The max speed for the Go-Kart tops out at ten miles per hour, so the Go-Kart should never be going fast enough to put your child in serious harm’s way.

The gas tank can hold roughly two and a half quarts. Manco estimates that the Bandit can get anywhere from thirty to fifty miles per gallon. This value changes depending on the terrain you’re Go-Karting on. Because the Bandit’s design is for new Go-Kart enthusiasts, there is a recommendation to use the Bandit on flat terrain and away from hazards for maximum safety assurance.

They are a simple Go-Kart line, and they keep their design simple so that users can easily understand when parts break and replace them. The Bandit 104B-11 is an excellent way to introduce children to Go-Karts and driving and start an interest in Go-Karts that may flourish into a full-time hobby. 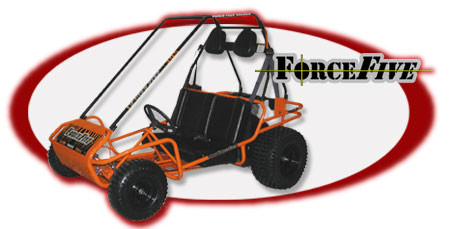 The Force Five is a natural step up from the Manco Bandit line. The Manco Force Five is designed for children who are at least twelve years old, but anyone above that age can use them.

The Force Five Go-Kart’s listed strength is enough to carry a two hundred and fifty-pound passenger. This extra power is part of what makes the Force Five unique because it makes this Manco product more capable of climbing hills and rough terrain.

Manco Go-Karts often use Robin brand engines. These small engines are designed specifically for miniature vehicles, like Go-Karts. The Force Five ups the ante because it has an additional torque converter that makes climbing hills easier, and increases the Force Five’s top speed.

The Force Five is a two-seater Go-Kart. It has room for two children, a driver, and an instructor, or any combination that stays below the weight limit. It also includes multiple safety belts, to ensure the safety of both passengers. 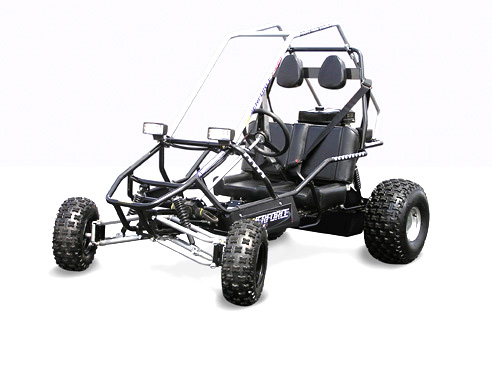 Manco Aerforce Go-Karts are one of the largest Go-Kart designs in Manco’s catalog. The Aerforce line of Go-Karts are designed for adults and have a higher carrying capacity than most.The Manco Aerforce F-211 Go-Kart has a fully designed suspension system. It has a system to provide enough torque to climb hills and rough terrain easily, and disc brakes provide more stopping power than lighter models.The Manco Aerforce has an engine that produces ten horsepower. Though it doesn’t compare to a car, the engine is strong enough for Aerforce Go-Karts to see use similar to other off-road vehicles when the need arises. The Aerforce line has both pull starts and electric starts for the motor.The Manco Aerforce is a powerful Go-Kart, and it can generate enough speed and torque to satisfy nearly any Go-Kart need. It is one of the best Manco models for adults, and while it isn’t as versatile as an ATV, it can emulate them in several ways due to its considerable number of features. 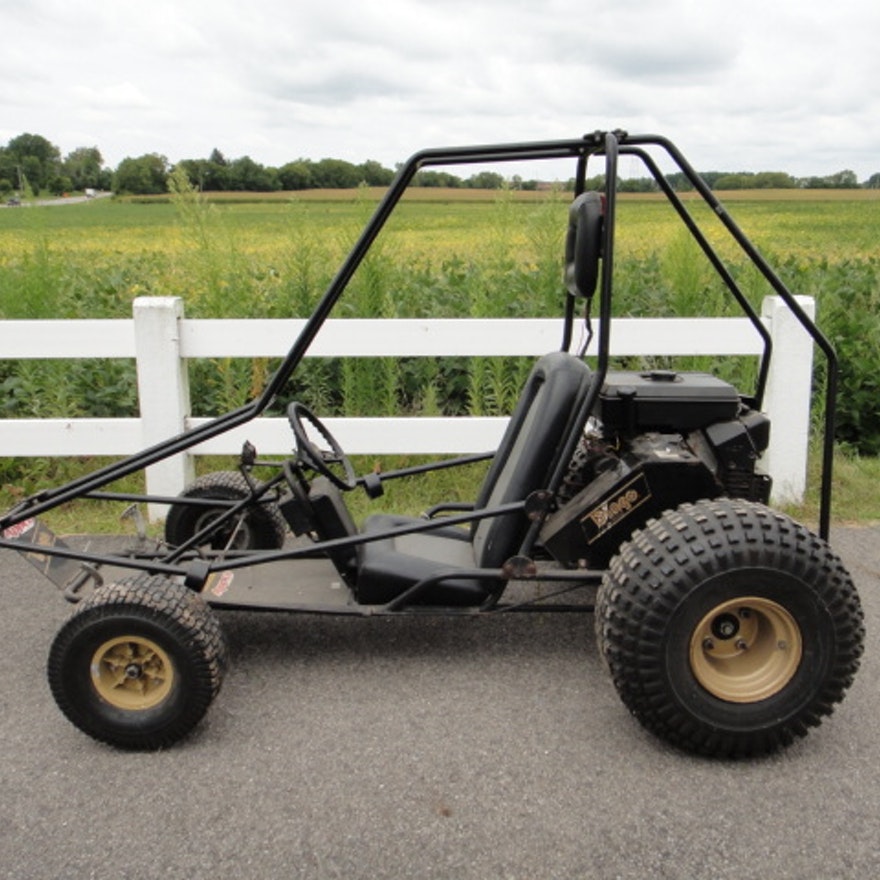 The Dingo is one of the oldest models in the Manco Go-Kart line. The Dingo line of Go-Karts have been updated multiple times, and serve as an excellent base if you plan to create a Do It Yourself Go-Kart.

The Manco Dingo Go-Kart produces an average of five to six horsepower. They have especially large wheels and require a torque converter to transfer that power properly to every part. Older models used a round axle, but newer Manco Dingos utilize a hex-shaped axle for improved performance.

The Manco Dingo Go-Kart’s cosmetics are just as easily customized. The basic models come in black, yellow, or purple colorations. There are paints that allow for more variety, and some newer models come in a silvery sheen.

The Dingo has a well-designed foundation, but several of its parts have required an update to stay relevant in the years since the model’s introduction. Newer models feature several of these upgrades, but the Dingo’s greatest strength lies in its customizable nature and its compatibility with DIY Go-Kart projects. 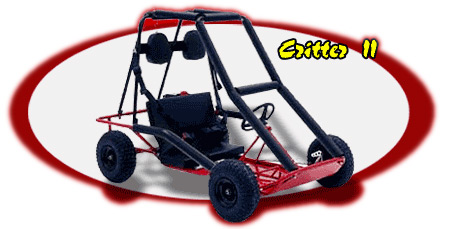 ​The Manco Critter Go-Kart line is another line designed for young children and small Go-Kart enthusiasts. It sets itself apart from the Bandit line because the Manco Critter’ss design is that of a two-seater Go-Kart.If you have two children, the Manco Critter II can be a better option than the Manco Bandit line. The weight added by the extra passenger is accounted for, as the engine can produce five horsepower. Both passengers share a single padded seat and backboard, but a metal pipe designated separate leg room areas for each passenger.The Manco Critter II has a clutch with a 12 tooth sprocket. The engine can be swapped with slightly more powerful variants, such as a Predator or a Tecumseh Power Sports engine. The main issue is horsepower, as any new engine must be able to bear the load of this slightly larger Go-Kart.The Manco Critter II receives a three-star rating. The Manco Critter Go-Karts are a good way to introduce young enthusiasts to Go-Karts. Neither of the passengers can be an instructive adult if you’re using the default Manco Critter II model though. The additional power and weight to accommodate a second passenger can also make it riskier for the first time Go-Kart drivers. 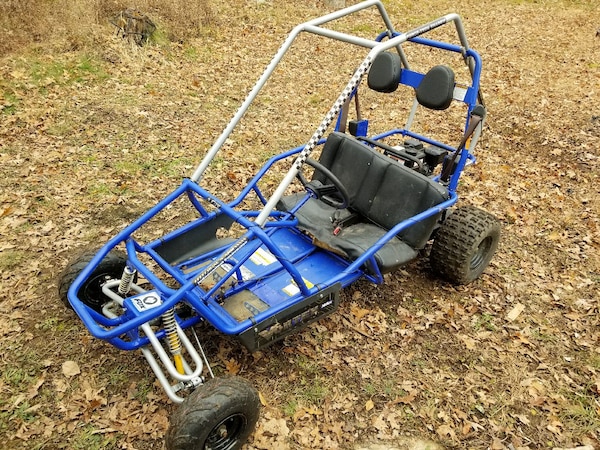 Like most Manco Go-Kart models, the Manco Vortex utilizes a Robin-Subaru engine. The Vortex has a powerful 169-cc, 4-stroke engine that is a bit much for child-sized Go-Karts.The Manco Vortex uses a pull string starter. The pull string is placed a bit too far away for you to use if you’re in the driver’s seat, so it may require some assistance to start. Otherwise, you’ll want to be careful when you start the Vortex and then go to sit in the driver’s seat.The Manco Vortex has a seat large enough for two passengers. Even with two passengers, the Manco Vortex has enough power to reach up to twenty-five miles per hour. The Manco Vortex Go-Kart has safety belts, but it is still recommended that you only allow adults to be a driver or passenger.It is a very powerful Go-Kart, and you can easily recommend it to any adult Go-Kart enthusiast. Unlike other Go-Karts on this list, the Vortex is designed from top to bottom for adult drivers. The amount of torque and speed the Vortex generates can benefit adults, but it makes the Vortex dangerous for younger passengers. 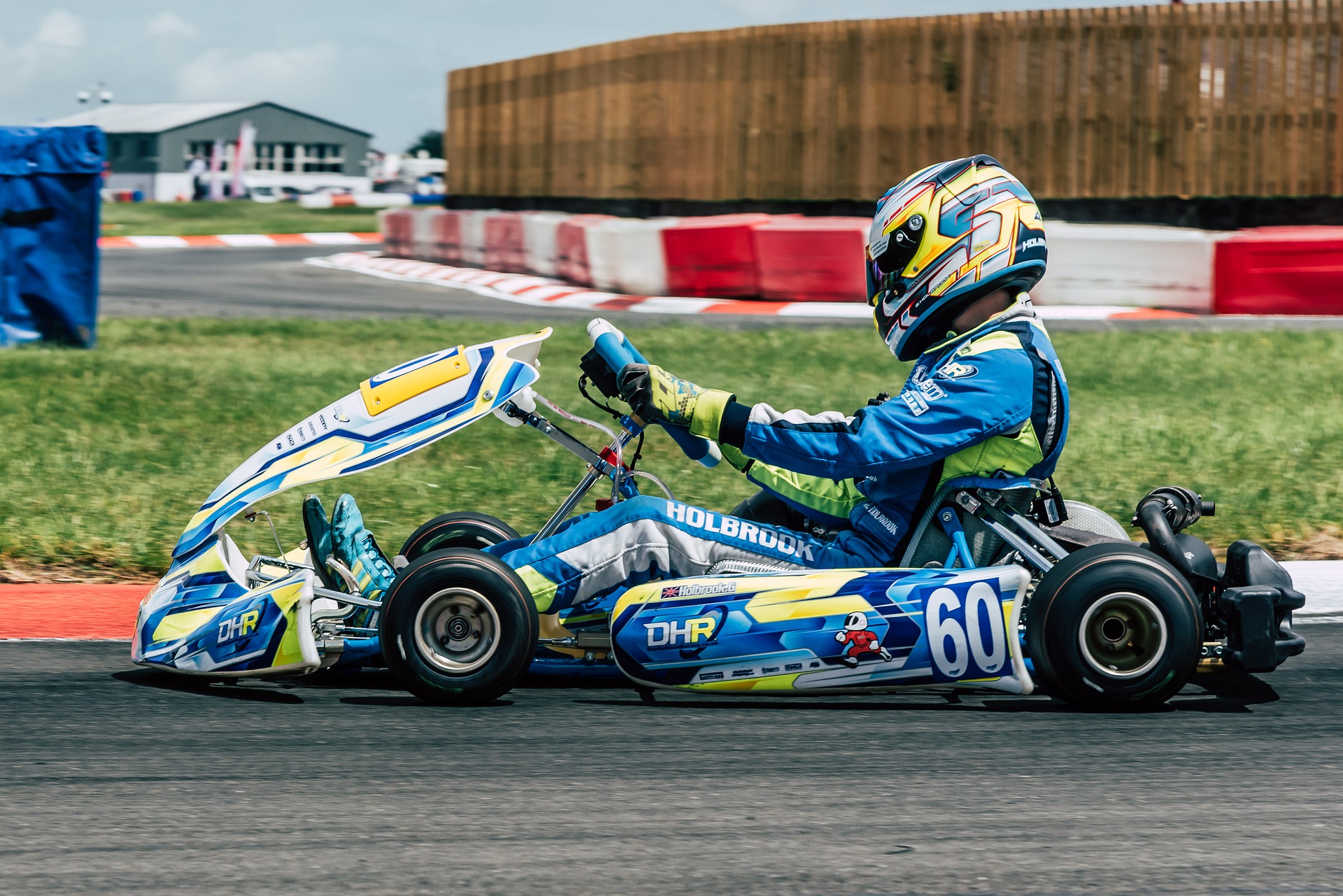 Image by Atanas Paskalev from Pixaba​​y

When choosing a Go-Kart, a common recommendation is that you keep at least one specific owner or driver in mind while shopping. Go-Karts aren’t as versatile as ATVs or other vehicles, so any attempt to buy a Go-Kart that anyone can use could make it a Go-Kart that’s not right for anyone.

Manco illustrates this point well by providing numerous Go-Kart lines designed for specific age groups. If you want to buy a Go-Kart for a young child or a smaller individual, you can buy any model from the Manco Bandit line and know what to expect.

The adult models offer the most versatility if you need a Go-Kart to fulfill several purposes. The additional power means a model like the Aerforce can carry an adult passenger, move over difficult terrain, and carry loads more easily.

Go-Karts are more prone to rolling than many vehicles. Larger models with additional weight are riskier, and so you should entrust larger Go-Karts to more responsible individuals. The additional power can also make them harder to handle. For this reason, Go-Karts designed for children, such as the Critter series, intentionally use low power motors to improve their safety rating.

Many people purchase a well-reviewed frame, such as the Manco Dingo Go-Kart, to build their own Go-Kart. Our recommendation is to purchase a professional Go-Kart design though, and only purchase recommended replacement parts for your Go-Kart model. The only time you should try to build your own Go-Kart is if you are very familiar with Go-Kart designs already.

You may also want to choose based on safety features. Many Go-Karts have a pull starter located away from the driver’s seat. This requires a driver to get help to start the vehicle safely, which you may prefer if you’re a parent buying a Go-Kart for an adolescent. You should never buy a Go-Kart without safety belts or other basic vehicle safety features, either.

As a participant in the Amazon Services LLC Associates Program, this site may earn from qualifying purchases. We may also earn commissions on purchases from other retail websites.

7 of The Best TaoTao ATV Reviews | Buying Guide | Expert Analysis
The Prodigy S5 Scooter | Complete Review by An Expert
Best Stunt Scooter and Pro Scooter Reviews
The Different Types of Go Kart Tires – Which One Is the Best for You?
How to Select Go Kart Engines Step by Step Guideline

Coleman Powersports Off Road Go Kart, Gas Powered, 196cc/6.5hp, Blue...
Shop now at Amazon.com
This website uses cookies to ensure you get the best experience on our website. Learn more.